24 Bottles ($13*)
Oxygen Absorbing Bottle Caps ($4 for 100)
Capper ($12)
Sanitizer ($3) - This will last a long time
Sugar
Optional - Bottle Filler ($2.75)
*This price can be decreased by saving non-twist-off bottles that you drink or by asking your local bar or pub to save bottles for you. Do not use twist-off caps as the capper will probably break the bottle during capping. 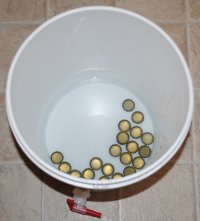 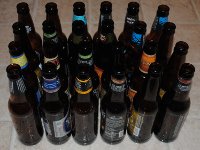 Alright, now you probably want to know how to do this. First, measure out some sugar. For a standard amount of carbonation use 4 tablespoons of standard granulated sugar. If you would like more carbonation use more sugar and for less carbonation, you can use a little less carbonation. However, you probably don't want to use much more than another half a tablespoon. If you put too much sugar in, the beer can become over carbonated, and in some cases, the bottles will explode.
Now that you have measured out your sugar, add about 1/4 cup of water to the sugar, stir, and bring to a boil. If all the sugar doesn't dissolve right away, don't worry. It will dissolve as the mixture is heated. Once you have boiling sugar water, you have what is called simple syrup. Remove from heat and let cool a little. You don't want to kill the yeast.
Now would be a good time to empty the sanitizing solution out of your bottles.
The next step is to add your sugar to your beer. If you are using a fermenting bucket and a bottling bucket. Pour your simple syrup into your empty bottling bucket then carefully pour your beer on top of the simple syrup. While doing this, try not to pour any of the yeast cake from the bottom of the fermenter into the bottling bucket. If you are using a single bucket, pour the simple syrup directly into your beer and very gently stir it in with a sanitized spoon. Try not to aerate the beer.

And now the moment you've been waiting for... Time to put the beer into bottles. Empty as much of the sanitizing solution as possible out of the bottles as possible. Now, if you aren't using a bottle filler, you will turn the spout on your bottling bucket to slowly pour your beer into the bottle. Tilt the bottle in order to avoid aeration as much as possible. If your bottles have stickers around the neck, this can be a good reference for how far to fill the bottle. Just fill up to the bottom of the sticker. If the bottles don't have stickers on the neck, fill to about 1.5 inches from the top of the bottle. 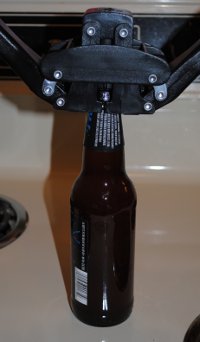 So now that you have beer all nicely bottled you want to drink it right? Well, unfortunately you can't drink it quite yet. Since you added sugar to the beer for carbonation, you have to give the yeast some time to do its work. Give the beer about a week to carbonate by setting it in a dark, room temperature area. After, a week refrigerate and enjoy. Remember though, in general, the longer you let your beer sit, the clearer it will be.